Blown away. You’ve just watched, no, experienced, the summer’s blockbuster action film at your favorite movie theater. Your heart is pounding, your head is spinning. For the past 2.15 hours you were completely immersed in the film. Every sight, every sound, perfectly orchestrated to put you at the center of the action. So, how did they do it? And, more importantly, how can you replicate this immersive experience in your home theater?

The sharp, Ultra HD imagery was certainly a factor, providing details that would previously have gone unseen. The same holds true for the audio. Whether DTS:X technology, Auro 3D or Dolby Atmos, 3D sound systems are bringing a new dimension to movies, gaming, television and music by adding a multi-dimensional level of realism.

Hear the pin drop and pinpoint where it was dropped from

Close your eyes and listen to all the sounds around you; your HVAC system, a slamming door, a barking dog or the wind whistling through an open window. You’re able to determine exactly where that sound is coming from. For a movie or game to simulate a real-life experience, it must recreate that same multi-sensory experience.  Surround sound systems, having made a comeback in 1976 with the introduction of Dolby Stereo, ushered in a new era for audio. Popularity for the new technology exploded in 1977 with the release of Star Wars and its engaging rear-channel effects. By the early 90’s we were enjoying 5.1 surround systems and who could forget 1999’s famous Matrix Lobby shootout in 5.1 HDR? Eventually, the 7.1 surround sound system brought audio to the rear of the room.  By 2004 we were enthralled with the breathtaking precision of the blind dancer in House of Flying Daggers as she meticulously replicates the strike of each surrounding drum with her scarves. And do you remember watching in awe as the Star Ship Enterprise navigated to the space dock in 2009 or being charmed as Wall-E catapulted himself through space using a fire extinguisher? Audio places a dimension to the event.

How 3D audio is achieved

There are distinct differences between DTS and Dolby Atmos technologies, but each accomplishes an immersive audio experience by routing sounds to their place of origin. DTS:X adds a height element to a surround sound system which improves sound accuracy. Without the need for additional speakers, and irrespective of the channel assignment or speaker placement, a compatible receiver can interpret and isolate an object’s location and direct its movement and volume.

In contract, Dolby Atmos creates the realistic effect through the use of multiple speakers. In a commercial movie theater, 64 speakers are used but the technology may be replicated in your home theater using only 14. Essentially, Dolby Atmos avoids the constraints of sounds being routed to specific channels. Instead, they are routed to particular speakers.  This demo video explains it well: Dolby Atmos Demo Sound Test.

The blockbuster sensation “Bohemian Rhapsody” took full advantage of Dolby Atmos technology and, in addition to a 4K image, provides a number of scenes showcasing Atmos on its UltraHD Blu-ray. The clearly defined sounds take you in and out of a recording booth and have you feeling like you’re a part of Live Aid 1985 singing along with “We are the Champions.”

According to Dolby, manufacturers can embed Atmos in both hardware and software, so that your game console, laptop, soundbar and even your smartphone, can support the technology. Are you ready to make immersive audio part of your home theater? Call SoundVision for a demo or in-home consultation and we’ll make your theater legendary!

Dolby Atmos Explained: What It Is, How It Works and Where to Get ItSurround Sound – The Audio Side of Home Theater

What is Dolby Atmos? All you need to know 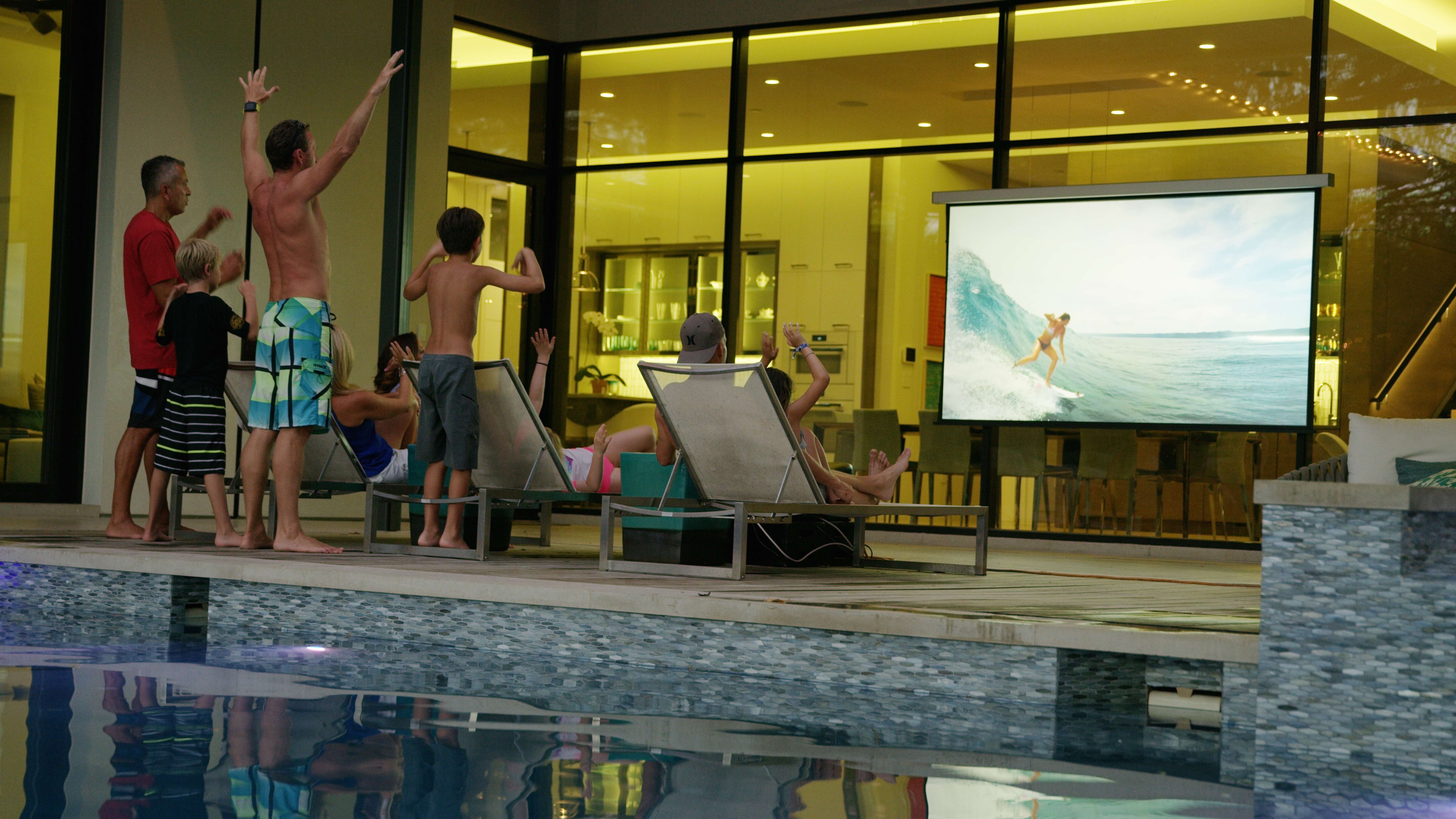 Reinvent movie night by taking it outdoors! With warm weather headed our way, we just can’t wait to get outside and enjoy every minute of Lake Norman Living! And family movie is no exception – take it outside!  Do you enjoy hosting your friends to watch the Panthers and Hornet games, gathering around the big screen in your media room? Picture instead catching the game from the comfort of your covered deck or while floating on a lounge chair in the pool! The best seat in the house may very well not be in the house at all!

While you may already be streaming your music through waterproof outdoor speakers or watching your weatherproof LED while cooking your famous Carolina barbeque, you may not have thought about enhancing your outdoor entrainment space by adding a theater under the stars!

Memorable Nights Under the Stars

An outdoor theater adds elegance and entertainment value to your outdoor living space and creates memories that last a lifetime. Your theater can boast an exceptional image as well as uncompromised sound. And the sound system can be multi-use, filling the space with music during the day and heart-thumping theater drama at night.  You can either stream from your favorite movie service or share content directly from your media room system or home theater. But unlike your indoor theater, you won’t need to paint a constellation on the ceiling!

Like other specialized outdoor AV gear, weather-resistant options are available for projectors and projection screens. Projectors can be housed in a climate-controlled mounting box or cleverly mounted for quick set-up on movie night. Screens can cleverly roll down from beneath your home’s eaves, pop-up from custom enclosures or occupy an outdoor wall. With limited to no “ceilings” to mount from however, determining where the projector can be installed can require some creativity. And added throw distance and lumens may be required to achieve exceptional picture quality. Fortunately, we at SoundVision are experts and always up for the challenge!

For uninterrupted enjoyment you’ll want a robust network and remote control to access your home’s system. Several waterproof remotes are available, giving you the ability to control everything -even when you’re in the pool! Control of elegantly designed landscape and patio lighting completes the outdoor living space. Lighting can accent feature areas and walkways for drama and safety while allowing separate control of zones surrounding the screen area.

Interested in exploring your choices in an outdoor theater? Warm weather is on its way! Now’s the time to start planning so give us a call us today!

Wired or wireless. Which is the right solution for your meeting space? Each offers distinct advantages, so how do you decide? It depends on 3 key factors: who will be using the space, what collaborative tools will be used, and your level of network security.

Whether a small huddle space or executive board room, enabling your team with the right tools, connectivity and capabilities is essential for creating a productive space. With your team and network in mind, let’s take a look at the three types of wireless solutions:

On many of the wireless presentation platforms, content can also be streamed so others can pick up the stream off-site. This is great for employees who work remotely or are traveling as well as for sharing content across a corporate network to a satellite location. Additionally, many systems can also provide the ability to present multiple desktops simultaneously, providing an enhanced collaborative experience.

Providing at least one “hardwired” connection is recommended for every meeting space as wireless access is not always available for all users. Some systems require an app or software suite which can be problematic for guest presenters who don’t have the ability or system rights to install software on their laptop, and others have severely locked down laptops where even the USB ports are not able to upload or download data which would include the widgets that the wireless USB dongles provide. Unforeseen network issues or outages can also render a wireless system inoperable if the system relies on the Client Wi-Fi, so the hardwired connection provides a suitable backup.

So, wired or wireless? Which is the right solution for you? Give us a call and let’s explore the options. We’ll discover your wants, guide you through your choices and work with your IT pro to ensure safe connectivity. And bear in mind, wireless doesn’t mean wire free. There’s still equipment that needs to live either in the room or in an equipment rack elsewhere and there’s still a need to provide power to the tabletop connectivity. It all starts with the infrastructure. Let’s get started, shall we?

Sloped ceiling in your bonus room? Our team used i

Joey, our warehouse manager trying to unscrew an e

Chime, a video doorbell designed and built for the

The light plays in this Concord concrete smarthome

This project final is right around the corner and

How many techs and boxes will fit into the Waterma

Outdoor audio, video and lighting can transform yo

This project is going to be absolutely amazing whe

Finishing touches on a commercial project in Moors